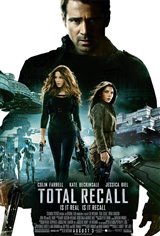 The devastation of chemical war has divided Earth into two superpowers at the end of the 21st Century—the United Federation of Britain and the Colony. While the UFB and the Colony struggle for supremacy, a simple factory worker, Doug Quaid (Colin Farrell), dreams of going to the planet Mars. Tired of his tedious life, Quaid visits Rekall—a company that implants artificial memories.

Rekall employee McClane (John Cho) persuades Quaid to be implanted with memories of a secret agent, rather than with memories of traveling to Mars. When Quaid undergoes a compatibility test for the system and fails, McClane accuses him of being an actual spy. Fearing he may be a secret agent whose cover has just been blown, Quaid quickly finds himself on the run and in search of answers.