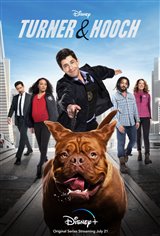 In this television adaptation of the 1989 film, uptight U.S. Marshal Scott Turner (Josh Peck) unwillingly inherits a big unruly dog named Hooch. After adjusting to the unwanted companion, Scott realizes that Hooch may be exactly what he needs in life.