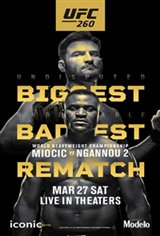 The foundations of the Octagon will shake on March 27 when the sport's premier big men, UFC heavyweight champion Stipe Miocic and number one contender Francis Ngannou meet for the second time in the main event of UFC 260. Widely considered to be the greatest heavyweight in UFC history, Miocic defeated Ngannou in 2018, but in his last four bouts, "The Predator" has scored four consecutive first-round knockouts, proving that he is more than ready to face Cleveland's finest once again.

Plus, fresh from a pair of victories over Max Holloway, UFC featherweight champion Alexander "The Great" Volkanovski defends his crown against Brian "T-City" Ortega.