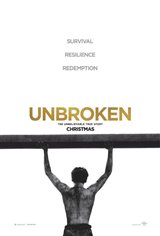 Bullied as a youngster, Louis "Louie" Zamperini (Jack O'Connell) learned to fight back and beat up his tormentors. He enjoyed that so much that he began getting into trouble, so his brother Pete encouraged him to take up track to direct his energy towards something that would give him a sense of pride.

Louie went on to set records as a runner and even made it to the 1936 Summer Olympics in Germany. In 1941 Louie enlisted in the United States Army Air Forces but while in combat, his plane was damaged and crashed into the sea. After 47 days on the water, he reached land but was immediately captured by the Japanese.

Thrown into a prisoner-of-war camp, he was tormented by prison guard Mutsuhiro Watanabe, who was considered one of the 40 most wanted war criminals in Japan.

Based on the book by Laura Hillenbrand.