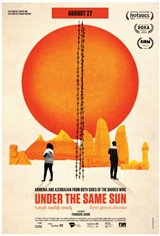 Under the Same Sun

For several centuries, Armenia and Azerbaijan have bitterly coveted and fought over the territory of Nagorno-Karabakh, a mostly Armenian mountainous region located on the border of the two countries. Over the years, villages have been destroyed, forcing thousands of residents to flee their homes and settle in neighboring regions. However, despite a ceasefire introduced in 1994, tensions have never been higher. The testimonies of journalists, political scientists and activists help to better understand this conflict.