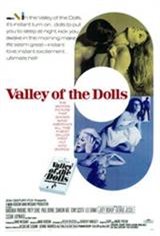 Valley of the Dolls

Neely lands on her feet thanks to a series of nightclub gigs, and soon she and Anne befriend Jennifer North (Sharon Tate), a buxom starlet.

As Neely becomes a huge star of stage and screen and Jennifer appears topless in a string of European art films, Anne becomes a wealthy cosmetics spokeswoman and suffers though a passionate but failed affair with aspiring writer Lyon Burke (Paul Burke).

As the pressures of fame and failed romance take their toll on all three women, they take refuge in food, sex, liquor, and pills -- especially Neely, who becomes downright monstrous (the titular dolls are the uppers and downers to which she becomes hopelessly addicted).

Although the film's characters are fictitious composites, Neely most closely resembles Judy Garland; Garland herself was originally cast as Lawson, but she was replaced after only a few days by Hayward.

Although the film's trailer played up the story's titillating subject matter, the script for Valley of the Dolls actually toned down Jacqueline Susann's novel.

And despite the fact that Dionne Warwick can be heard singing (Theme From) The Valley of the Dolls twice during the film, contractual snags kept her from releasing the soundtrack version; a different arrangement later became a number two pop hit in 1968.