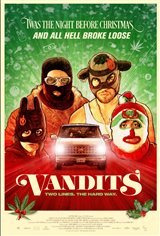 It's Christmas eve and the local bingo hall is open. Ramone (Robb Wells) is there to sell tickets, Ned (Enrico Colantoni) is on hand to call out the numbers, and a few hardcore regulars sit and dab away in hopes of yelling out the iconic winning phrase, "Bingo!" However, on this night of nights, business is about to pick up in a way they could have never imagined.

A group of aspiring thieves who call themselves "The Vandits," led by Uncle Sheldon (Tony Nappo), are headed out to pull off their first heist ever — at the bingo hall. With a 25K jackpot on the line, this Christmas eve heist should go off without a hitch... or so they think. With a twist at every corner, it seems as though The Vandits are living out their very own Groundhog Day scenario. Each time things go wrong, one of the Vandits, from Veeny (Francesco Antonio) to Jesse (Victoria Turko) and good-hearted Guy (Jesse Camacho), find themselves go back in time as their night starts over again.

Canadian Connection: Filmed in Winnipeg, Manitoba with a Canadian cast and crew.;