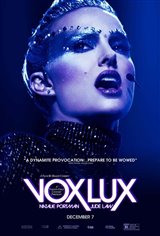 Celeste (Raffey Cassidy), 14, is shot in the neck during a high school shooting. Recuperating in the hospital, she writes a song with her older sister Eleanor (Stacy Martin) and sings it at a vigil for the victims. She's discovered by a manager (Jude Law) and launched into the world of show business, where she enjoys worldwide fame.

Years later, Celeste (Natalie Portman) is a single mother with a teenage daughter (also played by Raffey Cassidy) of her own. Now a temperamental diva in her thirties, Celeste is on the verge of a nervous breakdown. When she learns, just hours before she's scheduled to perform a huge homecoming concert, that the killers during a mass shooting in Croatia were wearing masks made famous in one of her music videos, she dreads the unwelcome media coverage that will follow. Her daughter begins to worry for her as Celeste seems to be on a downward spiral.