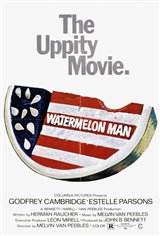 A white insurance salesman, Jeff Gerber (Godfrey Cambridge), gets the surprise of his life when he wakes up and discovers that his skin now resembles a black man's. In day-to-day life, he soon finds himself the victim of discriminatory practices -- the same kinds of behaviors that, ironically, he had once used on black people himself.

As his wife (Estelle Parsons) leaves him and all attempts toward explain and reverse the phenomenon fail, Jeff comes to accept and even profit from his new status.