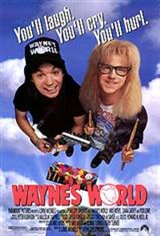 As slackers Wayne and Garth (Myers and Carvey) struggle to promote their public access cable show, Wayne's World, Wayne falls for a up-and-coming rock star, Cassandra (Carrere). Using their connections, the two try to help her career get off the ground, only to have her taken away by their sleazy advertiser (Lowe).