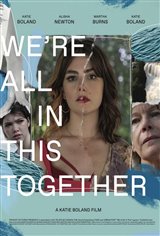 We're All in This Together

When her mother, Kate Parker (Martha Burns), goes over Kakabeka Falls in a barrel and winds up in a coma, Finn (Katie Boland) rushes home to Thunder Bay from Toronto. A few years earlier, Finn's identical twin sister, Nicki (Katie Boland) slept with Finn's boyfriend and got pregnant. Finn lives in the family home in Thunder Bay with her son and problematic younger sister Paris (Alisha Newton), and also looks after their mother, who has dementia.

When Kate went over the falls, it was captured on video and goes viral, to the horror of the dysfunctional Parkers. While Finn hopes to unite Nicki's son with his biological father (Adam Butcher), whom he's never met, younger sister Paris, 17, is having a secret online romance with a grown man in Minnesota. Once her grandmother comes out the coma, Paris is hoping to use her as the adult accompaniment she needs to cross the border to the States for a meetup with the man.

Canadian Connection: A Canadian production filmed in Hamilton, Ontario with a Canadian cast and crew, including star/writer/director Katie Boland.;