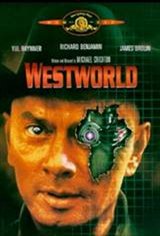 Businessmen James Brolin and Richard Benjamin are just crazy about the old west, thus they head to the section of Westworld populated by robot desperadoes, robot lawmen, robot dance-hall gals, and the like.

Benjamin's first inkling that something is amiss occurs when, during a mock showdown with robot gunslinger Yul Brynner, Brolin is shot and killed for real. It seems that the nerve center of Westworld has developed several serious technical glitches: the human staff is dead, and the robots are running amok.

Suddenly promoted to the film's hero, Benjamin (who seems as surprised and shocked as the audience) must first avoid, then face down the relentless Brynner.

Much of Westworld was lensed on the expansive grounds of the old Harold Lloyd estate in Beverly Hills, so it's no surprise that there's something Lloydlike about Dick Benjamin's instinct for self-preservation.