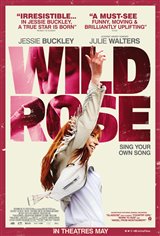 Young single mother Rose-Lynn Harlan (former musical reality talent show contestant Jessie Buckley, who came in second on the BBC show I'd Do Anything), 23, lives in Glasgow, but dreams of becoming a country star in Nashville.

After spending a year in prison on drug-related offences, Rose-Lynn goes home to her mother (Julie Walters), who has been taking care of Rose-Lynn's two young children. Rose-Lynn is indifferent to her kids, seeing them as an impediment on her road to stardom.

Once a singer at a local country music club, Rose-Lynn now has a strict parole curfew and an ankle monitor, which precludes her from returning to the stage. Instead, she finds a job as a housekeeper for an English woman, Susannah (Sophie Okonedo), during the day. When Susannah and her children hear Rose-Lynn singing while working, they become fans and want to help her reach her dreams.