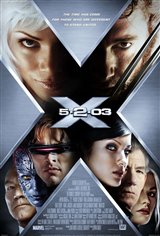 When a shocking attack by an unknown assailant possessing extraordinary abilities points to the work of a mutant, the political and public outcry for a Mutant Registration Act is renewed. Leading the anti-mutant movement is William Stryker (Cox), a wealthy former Army commander and scientist who is rumored to have experimented on mutants. Stryker’s mutant “work” is somehow tied to Wolverine's (Jackman) mysterious and forgotten past. As Wolverine searches for clues to his origin, Stryker puts into motion his anti-mutant program beginning with a full-scale military offensive on Xavier's (Stewart) mansion and School for the Gifted. Magneto (McKellen), newly escaped from the plastic prison he was incarcerated in, proposes a partnership with the X-Men to combat their common and formidable enemy, Stryker.