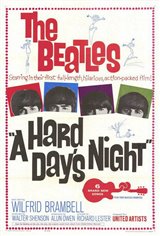 In their first movie appearance, The Beatles (John Lennon, Paul McCartney, George Harrison, Ringo Starr) travel by train with their crew to tape a television appearance, but Paul has to look after his grandfather, who's a troublemaker. The old man gets into a number of things when the boys aren't looking, including a gambling den.

He also convinces Ringo to go off and have some fun shortly before the live television appearance is scheduled to take place, which causes alarm and sends the other three Beatles out on a mission to find him.

Along the way they get into plenty of hijinks, including avoiding the police and hordes of screaming fans.