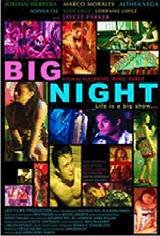 In this witty drama, a pair of brothers debate integrity versus compromise as they try to succeed in the restaurant business. Primo (Tony Shalhoub) and Secondo (Stanley Tucci) have journeyed from Italy to New Jersey in the mid-1950s, determined to make a killing with an authentic Italian restaurant, The Paradise. But their food is a bit too authentic; Primo may prepare a superb risotto, but most of his customers are wondering why they can't get a bowl of spaghetti and meatballs. Secondo tries to convince his brother not to berate the customers for requesting more American dishes, but Primo stands firm. Meanwhile, Pascal (Ian Holm), another local restaurateur, is doing great business with Italian style food the brothers wouldn't bother to spit on. Despite Primo's refusal to change his recipes to cater to lowbrow tastes, Secondo goes to Pascal begging for advice. With The Paradise on its last legs, Pascal offers to help -- Louis Prima, the famous Italian-American bandleader, is coming to town, and Pascal is to arrange a banquet in his honor. He'll stage the banquet at The Paradise in the hopes that Prima and his entourage (and hopefully the accompanying press) will fall in love with the authentic food and sing the praises of the foundering restaurant as he tours the country. The preparations for the big night and the behind-the-scenes family drama that ensues is highlighted by a strong supporting cast of Minnie Driver, Isabella Rossellini, and Allison Janney. Stanley Tucci, who plays Secondo, co-directed with Campbell Scott, who has a small but memorable role as a car salesman.