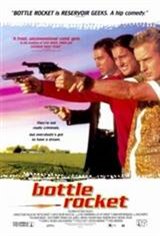 A bright, optimistic caper comedy from first-time director Wes Anderson, Bottle Rocket focuses on a group of young Texans aspiring to become master thieves. Their leader is Dignan (Owen C. Wilson, who also co-wrote the screenplay), an upbeat if naive charmer who convinces his friends Anthony (Wilson's brother Luke Wilson) and Bob Mapplethorpe (Robert Musgrave) to enter the crime business. After their first heist, a bizarrely-executed robbery of a local bookstore, the trio goes on the lam, taking up residence in a border hotel where Anthony falls in love with a maid played by Lumi Cavazos. When the three buddies decide that they need to return to the real world, they hook up with a master con-man (James Caan) who sends them on a daring -- if ill-concieved -- mission.