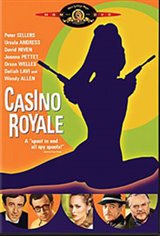 Retired after years of international espionage, Agent 007 is lured back into action to battle the evil spy organization SMERSH in this notoriously incoherent parody of the James Bond films. David Niven portrays the aging Bond, who atypically rejects the advances of a variety of women, and agrees to battle SMERSH's hold on the lavish Casino Royale only after organization head M is murdered. Also mixed up in the affair are several other secret agents, all named James Bond, played by everyone from Peter Sellers and Woody Allen to a chimpanzee. Despite a star-studded cast, a large production budget, and a hit score by Burt Bacharach, the film was universally panned as a muddled, overlong failure, with the occasional amusing sequence lost in the unintelligible surroundings. The participation of several screenwriters and five different directors, including John Huston, only adds to the confusion.