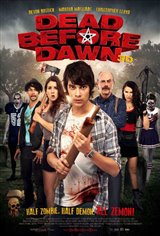 A group of college kids accidentally break an evil urn and end up inadvertently creating a curse that causes everyone they make eye contact with to kill themselves and turn into Zombie Demons.

With only 24 hours to reverse the curse and the fate of the entire world resting on their shoulders, the kids race through the night in a bloody Winnebago, armed with a slew of homemade weapons in an attempt to save the day.