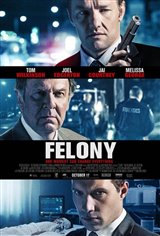 Police officer Malcolm Toohey (Joel Edgerton) has it all—a terrific family and a reputation for being an upright cop.

That changes one night when after celebrating a successful arrest, he makes a terrible mistake. To cover it up, he decides to lie about it—with tragic consequences. Senior officer Carl Summer (Tom Wilkinson) doesn't give him away, but his new partner Jim Melic (Jai Courtney) has the youthful arrogance of believing he knows what is right and what is wrong.