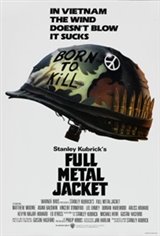 Kubrick's Vietnam story is told in two parts; Opening at basic training, then shifting focus to combat, we follow a platoon of soldiers as the experience the dehumanizing effects of war.

Famous for scenes of brutality leveled against one recruit in particular (played by Vincent D'Onofrio) at the hands of his drill sergeant and fellow soldiers, Full Metal Jacket examines the psychic attack that comes from all sides to turn our best and brightest into killing machines.