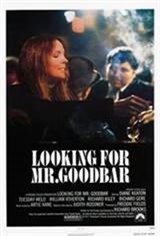 Adapted from Judith Rossner's best-selling novelization of a true story, Richard Brooks's melodrama turns one woman's search for a liberated life into a cautionary tale about promiscuity.

After an affair with her college professor, no-longer-good Catholic girl Theresa Dunn (Diane Keaton) follows the lead of her hedonistic sister (Tuesday Weld) and moves out of her oppressive family home to forge a life of her own. A compassionate teacher of deaf children by day, Theresa metamorphoses into a sexually free cruiser of singles bars by night.

She prefers the satisfying attentions of unpredictable, danger-tinged stud Tony Lopanto (Richard Gere) to the more noble intentions of social worker James (William Atherton), but she ditches anyone who prevents her from being her own girl. As Theresa's life threatens to spin out of control, she makes a vow to clean up her existence once and for all.

But before she makes the break, she goes to one more bar and brings home one more man (Tom Berenger).