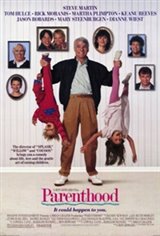 This feel-good ensemble comedy tracks a quartet of suburban siblings and their families over the course of a single summer. Hardworking Gil Buckman (Steve Martin) and his stay-at-home wife, Karen (Mary Steeenburgen), have just a few months to help their oldest son, Kevin (Jasen Fisher), overcome his high-strung behavior problems before he'll be relegated to special-education classes. Gil's difficult relationship with his own father, Frank (Jason Robards), has led him to become a would-be super-dad for his three kids, so he takes his son's difficulties more than a little personally. Gil's sister, Helen (Dianne Wiest), is trying to raise a moody, adolescent son (Leaf Phoenix) and an independent-minded daughter (Martha Plimpton) with no help from her well-off ex-husband, who's more interested in his new wife and family. Gil and Helen's sister, Susan (Harley Jane Kozak), meanwhile, must participate in the too-scripted Big Life Plans of her anal-retentive husband, Nathan (Rick Moranis), whose overachiever zeal infects even their toddler daughter. When long-lost brother Larry (Tom Hulce) show up with yet another get-rich-quick scheme, he brings with him a surprise addition to the family. Screenwriters Babaloo Mandel, Lowell Ganz, and Ron Howard negotiate their varied subplots with a deftness and comedic touch that transforms this conflicted clan into a suburban everyfamily.