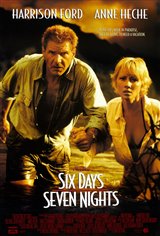 Think of Humphrey Bogart and Katherine Hepburn in the African Queen and you have the kind of mismatched duo who bond through misadventure that Harrison Ford and Anne Heche play here . (Although, of course, Hepburn wasn't the most famous out-of-the-closet actress in history who's even met President Clinton with her gal pal Ellen DeGeneres.) Here Heche plays a uppity magazine editor out to meet her deadline while Ford is a crusty cargo pilot who agrees to fly her to her destination.

When the plane is forced down on a desert island, mutual loathing turns into reciprocated lust as the two also find themselves under the guns of some seafaring bad guys.