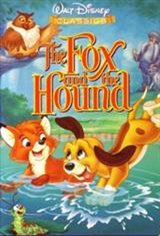 The Fox and the Hound

The Disney animated feature The Fox and the Hound tells the story of a friendship between traditional enemies. Tod is a fox whose parents have died. His best friend is a hunting dog named Copper. As Copper grows up, he learns that it is his job to hunt foxes.

Tod's caretaker Widow Tweed takes Tod to live in a game preserve where he falls madly in love with Vixey. Copper and his owner eventually enter the preserve to hunt Tod, and eventually Copper must decide between duty and friendship.