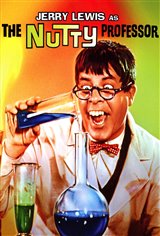 Professor Julius F. Kelp (Jerry Lewis) is an addle-brained, absent-minded chemistry instructor always incurring the wrath of the university administration by continually blowing up the classroom laboratory. The shy guy has his eyes on the student body of Stella (Stella Stevens). When a football-playing bully humiliates him, Kelp tries to concoct a chemical to help him gain physical strength and stature. The potion turns him into the handsome, hard-edged nightclub singer named Buddy Love. The mild-mannered professor's alter ego becomes a self-absorbed campus favorite at the Purple Pit, a hangout for hip cats and kittens. Stella falls for the enigmatic entertainer who wows the crowd with his jazzy, breezy delivery and cool demeanor. Buddy mixes it up with the bartender (Buddy Lester), who is instructed on how to mix the latest drinks by the professor-turned-party animal. The drawback of the potion is that it wears off at the most embarrassing an inopportune times for Buddy, turning him back into the helpless Kelp. Buddy performs at the annual student dance, and while on the dais, the elixir starts to wear off. The students and staff watch in amazement as he changes back into the professor. He gives an impassioned plea that people must learn to like themselves before others can like them in return. Stella still wants to be the teacher's pet, and the two make future plans together.