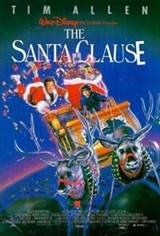 Television sitcom star Tim Allen made his big screen debut with this light, family-friendly holiday comedy. Allen stars as Scott Calvin, the divorced dad of Charlie (Eric Lloyd). Scott is distressed to learn that his ex-wife Laura (Wendy Crewson) and Charlie's psychiatrist stepfather Neal (Judge Reinhold) have informed his son that there is no Santa Claus.

While a sullen Charlie visits his dad on Christmas Eve, a noise on the roof brings them outside, where Scott startles the intruder, who tumbles from the roof. It turns out that there is a Santa after all, and Scott has just accidentally killed him. Because of a legal technicality known as the Santa clause, Scott inherits the jolly old elf's job.

As the next year passes, Scott rapidly gains weight, grows a white beard and meets the elf Bernard (David Krumholtz) -- who is the one who really runs the North Pole -- while Charlie regains his Christmas spirit.

However, Neal becomes concerned about Scott's sudden change in appearance and insistence that he's Santa, and he forces him to undergo a psychiatric evaluation. Director John Pasquin previously directed Allen in the TV series Home Improvement and would team with him again for Jungle 2 Jungle (1997).