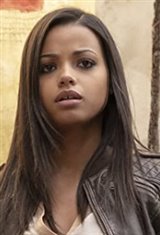 Actress Ella Balinska was born in London, England. A natural athlete, she competed at the national level in track and field, even taking part in the javelin throw for Team England.

Ella studied at the Guildford School of Acting. She began auditioning for roles when she was in her second year of university. She landed parts in short films and appearances on TV shows, including the popular British mystery series Midsomer Murders.

Ella also trained at the Academy of Performance Combat, where she became proficient in 12 different weapons. This qualification helped her land her breakthrough role as Jane Kano in the star-studded Charlie’s Angels (2019).

Ella played Cherie in the horror thriller, Run Sweetheart Run (2020), which premiered at the Sundance Film Festival in 2020.

She currently stars as Jade Wesker in Netflix's Resident Evil series, an adaptation of the popular video game and movies of the same name. An upcoming project is the horror film The Occupant, in which a geologist must survive in the Russian wilderness after a helicopter crash.

Aside from acting on screen, Ella will be lending her voice to the video game Forespoken.

With her help, the Ella Balinska Scholarship was created at the Guildford School of Acting, where the fees of a Global Majority first year student would be covered.