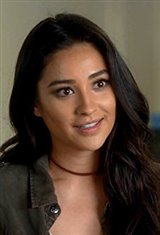 Canadian-born Shay Mitchell is an actress and model. Growing up in Mississauga, Mitchell always had an interest in the performing arts. She began dance lessons at five and went on to dance competitively.

At the age of 10, Shay moved with her family to Vancouver, British Columbia. Within a year of the move, she was selected by an international modelling agency that hosted open cast calls for teen and pre-teen girls looking for representation. By modelling, Mitchell had the opportunity to travel and work for various companies in cities such as Bangkok, Hong Kong, and Barcelona. However, by her late teens, Shay wanted to return to her true passion—acting. She moved to Toronto to focus on her acting studies.

After signing with her first theatrical agency, Shay made her television debut in 2009 on DeGrassi: The Next Generation and was fortunate enough to book several national commercials. She then landed a recurring role on the Disney series Aaron Stone and appeared on the Global series Rookie Blue. Shay's most prominent role to date has been on ABC Family's hit series Pretty Little Liars, playing Emily Fields, one of the main characters, although she originally auditioned for the role of Spencer Hastings.

In 2009, Shay appeared in the music video “Hold My Hand” by international recording artist Sean Paul and in 2011 became the spokesperson for the Pantene Nature Fusion shampoo line. In 2016, Shay landed the lead role of a disgraced ex-cop in the Sony Pictures release The Possession of Hannah Grace (2018).

When Pretty Little Liars concluded in 2017 after a seven-year run, Shay immediately landed a recurring role on the new Lifetime TV series You, as Peach Salinger. The show ran for a year, and Shay now plays a starring role on the ABC TV series The Heiresses.