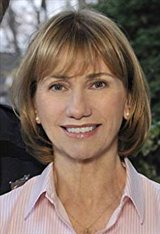 Born in Midland, Texas, Kathy Baker was raised in the Quaker religion. Her American father taught at Princeton and at the Sorbonne University in Paris, where he met her mother, a French citizen. Although Kathy showed an interest in acting at an early age, she did not study drama until she enrolled at the California Institute of the Arts. From there, she went on to the University of California at Berkley where she earned a Bachelor's degree in French.

Kathy was then off to Paris to study to be a Cordon Bleu chef. She returned to the States and worked as a pastry chef for a while, but she was realized she was still drawn to the theater. She began her professional career as a stage actor, winning an Obie award for her performance in the off-Broadway play Fool for Love, written by Sam Shepard. The same year, she made her feature film debut in The Right Stuff (1983), opposite Sam Shepard and Ed Harris.

Kathy returned to the big screen with the lead role in A Killing Affair (1986), and since then she has worked steadily, amassing guest performances on series such as Amazing Stories and Touched by an Angel, as well as in films such as Street Smart (1987) opposite Christopher Reeve, Permanent Record (1988) with Keanu Reeves, a co-starring role opposite Michael Keaton in Clean and Sober (1988), Jackknife (1989) with Robert DeNiro and Ed Harris, and Edward Scissorshands (2000) with Johnny Depp.

Having built a solid career in major motion pictures, Kathy was reluctant to make the switch to series TV when she was asked by producer David E. Kelley to join the cast of the new drama, Picket Fences. She changed her mind after reading the script. "I thought, 'This is better than 90 percent of the film scripts I read,'" she told The New York Times. "The character was more interesting than the characters I was getting. The writing was as good as the feature scripts I saw. All the elements just fell into place, and there was no reason to turn it down." She played the role of Dr. Jill Brock for four years, winning three Emmy awards and a Golden Globe for her work.

Kathy continued to work in features when on hiatus from the show, and when the series ended in 1996, she returned to them full time, completing roles in To Gillian on her 37th Birthday (1996), Inventing the Abbots (1997) and The Cider House Rules (1999). In 2000, she returned to the small screen with a regular role in Boston Public, created by David E. Kelley. She played the role of Meredith Peters for one season, earning an Emmy award nomination for her work before returning to feature films such as Cold Mountain (2003) with Nicole Kidman and Jude Law and The Jane Austen Book Club (2007) with Emily Blunt.

Her filmography also features Big Miracle (2012) alongside Drew Barrymore and John Krasinski, Saving Mr. Banks (2013) starring Tom Hanks and Emma Thompson, as well as The Age of Adaline (2015) with Blake Lively in the title role.

Kathy starred alongside Sam Elliott and Ashton Kutcher in the Netflix comedy series The Ranch from 2016 to 2018, and can currently be seen in Tru TV's comedy series I'm Sorry (2017 to 2019). On the big screen, she recently appeared alongside Milo Ventimiglia and Amanda Seyfried in the doggie drama The Art of Racing in the Rain (2019).

Kathy married Donald Camillieri in 1985, but they divorced in 1999 after having two children. She married TV director Steven Robman in 2003.