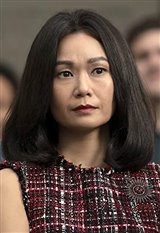 Hong Chau was born in a refugee camp in Thailand in 1979 after her parents and two brothers fled Vietnam by boat when her mother was six months pregnant with Hong. A Vietnamese family in New Orleans helped sponsor their family to come to the United States. Hong grew up speaking Vietnamese and only later learned English in school. Her parents worked hard to ensure the family had enough money to send the children to college.

With help from financial aid in the form of Pell Grants, Hong attended Boston University for creative writing. Her parents wanted her to study something more practical, so she changed her major to film studies. It was here where she started acting in hopes of challenging her introverted personality. She got her start in other students’ short films. After college, Hong got a job with CBS and was planning to have a career in documentaries. She later moved to New York City to study acting and began her film and television career in 2006.

Four years later, she landed one of her first major roles, on the television series Treme. In 2014 her feature film debut was in Inherent Vice (2014), starring Joaquin Phoenix. For an entire year after that role, Chau wasn’t able to book any other auditions and her only roles were in small commercials.

She turned to theatre a year later with the Off-Broadway play John, which she credits with helping to strengthen her acting. One of her most stand-out roles to date was in the film Downsizing (2017). She was nominated for several awards, including a Golden Globe and SAG Award.

Her first leading roles came in 2019, in the indie films Driveways and American Woman. She can currently be seen as Audrey Temple on the Amazon Prime Video series Homecoming and in a smaller role in the Disney+ film, Artemis Fowl (2020).

Hong lives in Los Angeles, California with her dog Kobe.