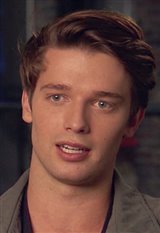 The son of Austrian-born actor Arnold Schwarzenegger and news anchor Maria Shriver, Patrick Schwarzenegger got his start at the age of 12 in the Dennis Dugan directed comedy The Benchwarmers (2006), playing a "Jock Kid" alongside stars David Spade and Rob Schneider.

Six years later, after high school graduation from private preparatory school Brentwood School in 2012, he played a supporting role in Stuck in Love (2012), starring Greg Kinnear and Jennifer Connelly. His next supporting role would be in the teen comedy/horror Scouts Guide to the Zombie Apocalypse (2015).

In the romantic drama Midnight Sun (2018), he starred opposite Bella Thorne as Charlie, a young man who falls for a girl with a condition that allows her to only go out when it's dark.

Patrick is a co-founder of "Project360, a modern clothing company that donates some of their proceeds to charity.