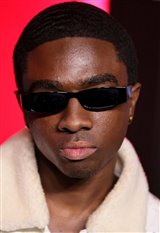 Caleb McLaughlin grew up in Carmel, New York. He studied at Happy Feet Dance School before attending Seven Star School of Performing Arts in Brewster. He went on to study at The Harlem School of the Arts.

From 2012 to 2015, Caleb starred in the Broadway musical The Lion King as Young Simba. After that, he went on to make television appearances in small roles on series such as Law and Order: Special Victims Unit, Unforgettable, and Shades of Blue.

In 2016, Caleb appeared in his breakout role of Lucas Sinclair on the hit Netflix series Stranger Things. For the role, he won the YoungStars Award at the BET Awards in 2017 and the Screen Actors Guild Awards for Outstanding Performance by an Ensemble in a Drama Series.

He made his feature film debut opposite Idris Elba in the western film, Concrete Cowboy (2020).

Partnering with ATTN in a social media campaign, Be Your Biggest Fan, he champions positive body image on social media. Additionally, in 2020 he partnered with the NFL and American Cancer Society to fight against cancer at Super Bowl LIV by auctioning off a VIP experience with the actor.