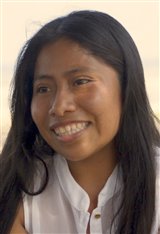 Yalitza Aparicio was a schoolteacher in the Mexican state of Oaxaca when she was cast in director Alfonso Cuarón's film Roma, in the lead role of Cleo, a housekeeper and nanny for an upper middle class family in Mexico City.

Yalitza heard about a casting call in her hometown of Tlaxiaco, Oaxaca and was encouraged by her sister Edith to audition. Without any acting experience to her name, she didn't expect to get a role, so she was surprised when she was given several callbacks and finally, learned she was cast in the film.

The film featured many first-time actors, and to make the process easier, Cuarón filmed it in chronological order.

Yalitza's character speaks Mixtec, which was a language she'd grown up listening to, but didn't actually speak, so a teacher was hired to help her.

In January 2019, Yalitza became the second Mexican actress to ever be nominated for a Best Actress Academy Award. She has also won the New Hollywood Award at the Hollywood Film Awards and has graced the cover of Vogue Mexico.