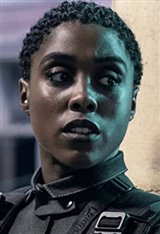 Lashana was born in Hammersmith, London, and is of Jamaican descent. For a large part of her childhood, Lashana was raised by her single mother and her grandmother, who had immigrated to the U.K. from Jamaica. Lashana graduated from ArtsEd drama school in London with a Bachelor of Arts degree in acting in 2010. She began her acting career in the theater industry in London.

Lashana made her television debut in 2007, appearing in one episode of The Bill (2007), playing Precious Miller.

It wasn’t until 2012 when Lashana made her big screen debut in the film Fast Girls (2012) in the role of Belle Newman. The role required her to train four hours a day, five days a week, a challenge she took on with excitement.

In 2015, she landed her first regular television role on the show Crims (2015), playing Gemma. That same year, she starred alongside Lenny Henry as Rita in the Chichester Festival Theatre production of Educating Rita, which played at the Minerva Theater.

In 2017, Lashana made her debut in the American film industry, appearing in the ABC show Still Star-Crossed in the lead role of Rosaline Capulet. Although a short series that only lasted one season, Lashana gained a lot of popularity among American audiences, shooting her career into stardom.

With her career reaching new levels of fame, Lashana appeared in the Marvel film Captain Marvel (2019) as Maria Rambeau, the best friend of Brie Larson’s character, Carol Danvers, a.k.a. Captain Marvel. She received a Screen Nation Film and Television Award nomination for Female Performance in Film for her work on the film.

More recently, she appeared as MI6 agent Nomi in the latest Bond film, No Time To Die (2021) alongside Daniel Craig.

Growing up, Lashana initially wanted to be a singer and enrolled in a music course at the Sylvia Young Theatre School. It was there where she took up acting, further pursuing that art form alongside singing. ~Sean Olegario