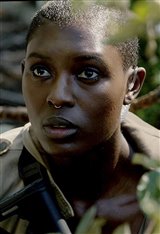 Jodie Turner-Smith was born in Peterborough, Northamptonshire, England, to Jamaican parents. When her parents divorced, she moved to the United States with her mother, settling down in Gaithersburg, Maryland.

After high school, she studied at the University of Pittsburgh, graduating in 2008. She worked as a banker for a short while, but after a mutual friend introduced her to musician Pharrell Williams, he convinced her to move to Los Angeles to become a model.

She modeled and also performed in commercials for five years before landing her first acting role on the HBO vampire series True Blood in 2013, playing a blood siren.

Numerous minor roles in short films, indie films and music videos followed between 2013 and 2017, including an appearance in the music video for Zayn Malik's "Pillowtalk."

In 2017, she was cast as Sergeant Azima Kandie on the final two seasons of TNT’s sci-fi series The Last Ship. In 2018, she played a starring role as Melantha Jhirl on the SyFy series Nightflyers, based on the novella by George R.R. Martin. She then played Josie on Cinemax’s crime drama series Jett, which premiered in June 2019.

But it was her starring role as Queen in Queen & Slim (2019) opposite Daniel Kaluuya that earned her the most attention of her career to date. She received a nomination for Best Breakthrough Performance from the Alliance of Women Film Journalists and two nominations from the Black Reel Awards for her work in the film.

Jodie has since completed a role as Kyra in the sci-fi drama After Yang (2020), co-starring alongside Colin Farrell and will also appear this year in Paramount Pictures' action film Without Remorse (2020), based on the novel by Tom Clancy.

During an interview that was published in the January 3, 2020 issue of W Magazine, Jodie revealed that she'd had a crush on Joshua Jackson since he played Pacey on Dawson's Creek. They met at a party in 2018, and by November 2019, they were married. In December 2019 they announced that they were expecting their first child, who is due in March.