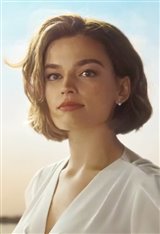 Emma Mackey was born in Le Mans, France, and spent her childhood in Sable-Sur-Sarthe. She is the daughter of a French father and English mother and has dual French-British citizenship. After high school, she moved to England to study English Language and Literature at the University of Leeds.

After graduating in 2016, Emma moved to London to pursue acting. Unable to afford rent, she worked as a live-in nanny before leaving to apply to drama schools. She was rejected from drama school, but continued attending acting classes before landing an agent.

Her first professional role was in the TV movie Badger Lane (2016), a found-footage horror film about a group of journalists investigating an old factory in England. In 2019, she starred as Maeve in the Netflix series Sex Education alongside Asa Butterfield and Gillian Anderson. For the role, she was nominated for Best Female Comedy Performance at the British Academy Television Awards in 2021 and won for Outstanding Comedy Actress at the National Comedy Awards in 2022.

Emma starred in the French independent romance film Eiffel (2021), which premiered at the Alliance Française French Film Festival in Australia. The following year, she appeared in Death on the Nile (2022), based on the novel of the same name by Agatha Christie.

In 2020, it was announced that Emma would portray Emily Brontë in an upcoming biographical story about the author. Additionally, Emma has been cast in Greta Gerwig's Barbie (2023), alongside Margot Robbie and Ryan Gosling.