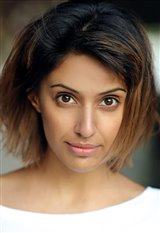 Ritu Arya is a British actress best known for her work on Doctors and The Umbrella Academy.

Ritu was born in Guildford, England to Indian parents. She attended Southampton University, where she earned her Bachelor's Degree in Astrophysics. She then went on to pursue an acting career, enrolling in the Oxford School of Drama.

Ritu made her acting debut in 2013, playing the minor role of a Bureau Girl on an episode of The Tunnel (2013).

She was also cast in the recurring role of Dr. Megan Sharma on the BBC One soap opera, Doctors (2013-2017). Her performance on the show earned her a British Soap Award nomination for Best Newcomer in 2017.

Other notable television shows Ritu has appeared on include Sherlock (2014), where she played Gail, and Humans (2016-2018), playing the recurring role of Flash, a self-aware synthezoid.

Ritu made her big screen debut in the role of Rachida in the film Daphne (2015).

In the second season of The Umbrella Academy (2020), Ritu played Lila Pitts. Many consider her work on the show to be her breakout role.

Her most recent project, Red Notice (2021), has her sharing the big screen with stars such as Dwayne Johnson, Ryan Reynolds, and Gal Gadot.

Outside of acting, Ritu enjoys playing the drums, and is a part of the band KIN. Ritu and the band released their first single in 2020 titled “Sharing Light.” ~Sean Olegario