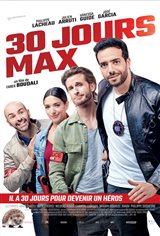 Having joined the police to follow in the footsteps of his father, who died in the line of duty, Rayane is best known for his clumsiness. After having failed in the arrest of the Rat, a big time drug dealer who lives in the same neighborhood as Rayane, he’s relegated to the mail service, becoming the laughing stock of the police station. Which completely ruins his chances to impress his colleague Stéphanie. To add to the fearful cop's misfortune, an incompetent doctor mistakenly tells him that he only has 30 days to live. Determined to make the most of his last moments on Earth, Rayane scams the Rat and flies to Las Vegas to party. But when he finds out that the drug kingpin was responsible for his father's death, he immediately returns to France and, believing he has nothing to lose, takes any risk necessary to stop him.