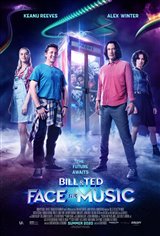 After all these years, Bill (Alex Winter) and Ted (Keanu Reeves) are still close, but still haven't grown up. Their wives even suggest couple's therapy, but Bill and Ted decided to go as a group. One day while at a wedding, Bill's dad, Captain Logan (Hal Landon Jr.). tries to convince Bill and Ted that they didn't time travel. He wants them to stop the delusions and get real jobs in order to be role models for their daughters.

This seems to affect Ted, who wants to give up on their destiny to reunite the world. Bill, however, refuses. This is when they’re visited by a messenger from the future and they learn that only their song will save the world. Unsure if they can write it in time, Bill and Ted decide to time travel and take the song from their future selves. Their daughters, Thea (Samara Weaving) and Billie (Brigette Lundy-Paine) happen to see the messenger arrive to speak to their dads and decide they want to help them out. They travel through time to put together the most excellent band from people throughout history.