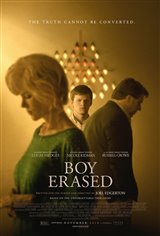 Jared (Lucas Hedges) is the teenage son of a Baptist minister (Russell Crowe) in a small American town. Although his mother (Nicole Kidman) loves him unconditionally, his father tells Jared he'll have to disown him when the teen admits he's attracted to men.

His mother takes him to a church-run gay conversion program, where they teach the patients that no one is born a homosexual, that it's a choice. He's told that God will not love him the way that he is. However, Jared has a hard time trying to wrap his head around these ideas.