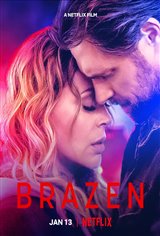 When Grace meets her sister's neighbor, handsome homicide detective Ed Jennings (Sam Page), she goes out with him, but when she returns, she discovers Kathleen has been murdered. It turns out that Kathleen, who was a high school teacher by day, earned extra money at night as a webcam performer named Desiree. Grace wants to be involved in the case, despite Ed's misgivings.

Based on the novel Brazen Virtue by Nora Roberts.