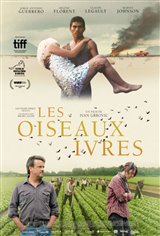 Willy, the driver for a Mexican drug lord, is in love with Marlena, his boss’s wife. When their affair comes to light, the lovers each flee on their own, keeping their destination secret. After searching for Marlena for four years, Willy becomes convinced that she’s living with an aunt in the Montreal region. When he arrives in Canada, the illegal exile gets hired as a seasonal worker at the Bécotte farm. Julie, the owner, is having problems with her husband Richard, who helps her manage the farm. While continuing to search for information that will lead him to Marlena's aunt, Willy comes to the aid of his employer’s daughter. But his attention, misinterpreted, causes a tragedy.