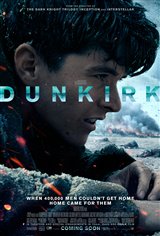 In 1940, during the early days of World War II, hundreds of thousands of Allied soldiers from Britain, Belgium and Canada find themselves trapped on the beach of the French coastal town of Dunkirk as they face an impossible crisis. They've been cut off and surrounded by ruthless German Nazi troops. Over the course of eight days, the men must struggle to survive and hope for rescue.