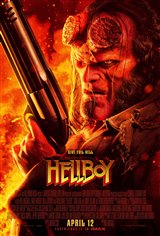 In the Dark Ages, King Arthur and Merlin betray the powerful immortal witch Nimue the Blood Queen (Milla Jovovich), who wanted humans and monsters to co-exist peacefully. They slice her into bits and ship the pieces all over Britain.

One of Hellboy’s enemies decides to put back the pieces of dismembered Nimue, who returns to end mankind. Hellboy and Broom team up with Alice (Sasha Lane) and Major Ben Daimio (Daniel Dae Kim) to save the world from doom.

Based on the graphic novels by Mike Mignola.