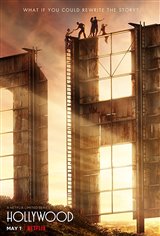 Hollywood is a new limited series from Ryan Murphy and Ian Brennan. It follows a group of aspiring actors and filmmakers in post-World War II Hollywood as they try to make it in Tinseltown — no matter the cost. Taking a look at Hollywood's Golden Age, the series showcases the unfair systems and biases across race, gender and sexuality that continue to this day.