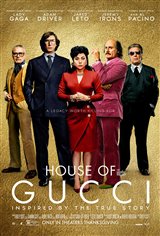 Inspired by the shocking true story of the family empire behind the Italian fashion house of Gucci. Spanning three decades of love, betrayal, decadence, revenge, and ultimately murder, we see what a name means, what it’s worth, and how far a family will go for control.

Maurizio Gucci's (Adam Driver) wife Patrizia Reggiani has her own vision for her future with the family as she urges Maurizio to bring in new blood for the fashion titan, but he is reluctant to do so. Reaching a breaking point, Patrizia begins to enact a plot to position herself in power of the Gucci empire through scandals, betrayal, and ultimately murder as a woman who knows she isn't ethical, but believes she is fair.