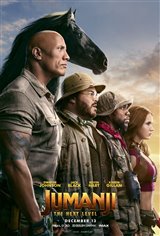 Jumanji: The Next Level

In Jumanji: The Next Level, the gang is back but the game has changed. When teenagers Bethany (Madison Iseman), Martha (Morgan Turner) and Anthony a.k.a. "Fridge" (Ser'Darius Blain) find out Spencer (Alex Wolff) went back into the game on his own, they decide to go rescue him, but they're sucked into the game before they can choose their avatars. Once in Jumanji, they discover that nothing is as they expected it to be.

Spencer's grandfather (Danny DeVito) is now Dr. Smolder Bravestone (Dwayne Johnson). His friend Milo (Danny Glover) is now Moose (Kevin Hart), Fridge is Professor Shelly Oberon (Jack Black) and Bethany is nowhere to be found. Only Martha is the same character — Ruby Roundhouse (Karen Gillan). When they discover Bethany, it turns out her avatar is a horse, ridden by Alex (Nick Jonas), whom they met last time they played the game. Something seems to have gone very wrong — and they think the game is broken. Especially when they learn that not everyone will leave the game alive this time around.