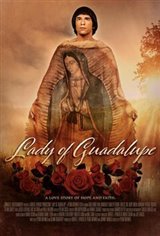 The blessed Virgin Mary, mother of God appeared more than once to 57-year-old Juan Diego, a simple Mexican farmer who was later canonized by Pope John Paul II. When a young journalist is asked to write an article about Juan Diego, he struggles to find meaning and inspiration, as his wife is in the hospital and he is out of faith in his own life.

While researching, he begins to receive signs as well. One journey connects two men searching for faith. Though they lived over 500 years apart, some things are stronger than the great expanse of time.