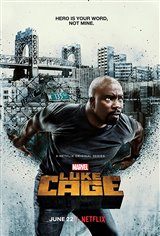 After an experiment, Luke Cage (Mike Colter) is left with super strength and unbreakable skin. As a fugitive, he keeps a low profile and rebuilds his life in Harlem, New York City. When crime boss Cornell "Cottonmouth" Stokes (Mahershala Ali) wages war on Harlem, Luke has to come forward and protect the city while confronting his past.

In the second season, Luke creates a video to display his invincibility. His powers make him popular with the people of New York, but also makes many of them fear him. Harlem's safety is threatened by a new villain, Bushmaster (Mustafa Shakir), who mirrors Cage's own abilities and whom Cage vows to find and destroy.